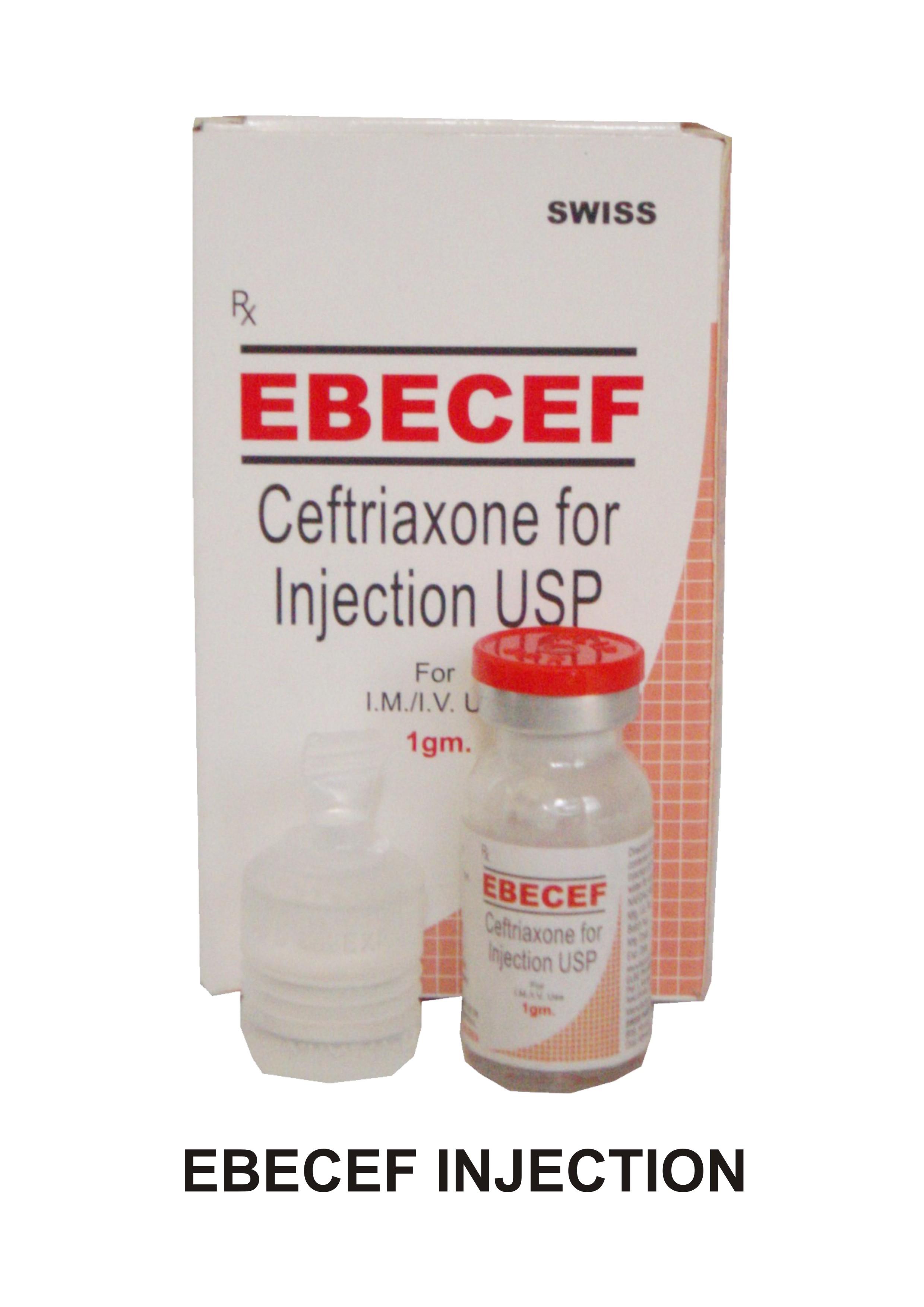 Structurally and pharmacologically related to penicillin.
Mechanism of action:
Ceftriaxone inhibits mucopeptide synthesis in the bacteria cell wall, making it defective and osmotically unstable. The drug is usually bactericidal, depending on organism susceptibility, dose, tissue concentrations and the rate at which organisms are multiplying.
It is more effective against rapidly multiplying organisms that are forming cell walls.

Cross-allergenicity with penicillins: Administer cautiously to penicillin-sensitive patients. There is evidence of partial cross-allergenicity; cephalosporins cannot be assumed to be an absolutely safe alternative to penicillin in the penicillin-allergic patient. The estimated incidence of cross-sensitivity is 5% to 16%; however, it is possibly as low as 3% to 7%.
Serum sickness-like reaction (erythema multiforme or skin rashes accompanied by polyarthritis, arthralgia and, frequently fever) have been reported; these reactions usually occur following second course of therapy. Signs and symptoms occur after a few days of therapy and resolve a few days after drug discontinuation with no serious sequelae. Antihistamines and corticosteroids may be of benefit in managing symptoms.
Seizures: Several cephalosporins have been implicated in triggering seizures, particularly in patients with renal impairment when the dosage is not reduced. If seizures associated with drug therapy occur, discontinue the drug. Anticonvulsant therapy can be given if clinically indicated.
Pregnancy: Use only when potential benefits outweigh potential hazards to the foetus.
Lactation: Excreted in small quantities in breast milk and hence, use only when the benefits outweigh potential hazards to the neonate.

Ceftriaxone has been generally well tolerated. Adverse reactions are usually mild and transient.
The most common side-effect are gastrointestinal, consisting mainly of loose stools and diarrhea or, occasionally, nausea and vomiting, stomatitis and glossitis. Cutaneous reactions, including maculopapular rash or exanthema, pruritus, urticaria, oedema and allergic dermatis have occurred. Isolated cases of severe cutaneous adverse reactions (erythema multiforme, Stevens Johson Syndrone and Lyell's Syndrome/toxic epidermal necrolysis) have been reported.
Haematological reactions have included anaemia (all grades), haemolytic anaemia, leucopenia, neutropenia, thrombocytopenia, eosinophilia, agranulocytosis and positive Coombs' test. Regular blood counts should be carried out during treatment.
Ceftriaxone has rarely been associated with prolongation of prothrombin time. Headache and dizziness, drug fever, shivering and transient elevations in liver functions tests have been reported in a few cases. Other rarely observed adverse reactions include glycosuria, oliguria, haematuria, increase in serum creatinine, mycosis of the genital tract and anaphylactic-type reactions such as bronchospasm.
Very rarely, reversible symptomatic urinary precipitates of Calcium Ceftriaxone have occurred after Ceftriaxone administration. Patients who are very young, immobilized or who are dehydrated are at increased risk. There have been a few reports of anuria and renal impairment following this reaction.
Shadows which have been mistaken for gallstones, but which are precipitates of calcium Ceftriaxone, have been detected by sonograms. These abnormalities are commonly observed after an adult daily dose of two grams per day or more, or its equivalent in children. At doses of two grams a day or above these biliary precipitates may occasionally cause symptoms. Should patients develop symptoms, non-surgical management is recommended and discontinuation of Ceftriaxone should be considered.
The evidence suggests biliary precipitates usually disappear once Ceftriaxone has been stopped. The risk of biliary precipitates may be increased by treatment duration greater than 14 days, renal failure, dehydration or total parenteral nutrition.
There have been isolated reports of pancreatitis although a causal relationship to be ceftriaxone immediately after administration but is usually well tolerated and transient.
Local phlebitis has occurred rarely following intravenous administration but can be minimized by slow injection over at least 2-4 minutes.

Administer IV or IM. Continue for at least 2 days after signs and symptoms of infection have disappeared. Usual duration is 4 to 14 days; in complicated infections, longer therapy may be required. For S. pyogenes, continue for at least 10 days.
Adults: Usual daily dose is 1 to 2 gm once daily (or in equally divided doses twice a day), depending on type and severity of infection. Do not exceed total daily dose of 4 gm.
Uncomplicated gonococcal infections: Single IM dose of 250 mg.
Surgical prophylaxis: Single 1 gm dose ½ to 2 hours before surgery.
Children:To treat serious infections other than meningitis, administer 50 to 75 mg/kg/day (not to exceed 2 g) in divided doses every 12 hours.
Meningitis: 100 mg/kg/day (not to exceed 4 g). Thereafter, a total daily dose of 100 mg/kg/day (not to exceed 4 g/day) is recommended. May give a daily dose once per day.
In skin and skin structure infections: 50 to 75 mg/kg once daily (or in equally divided doses twice daily), not to exceed 2 g.
CDC (1993 Sexual Transmitted Disease Treatment Guidelines, Morbidity and mortality schedule for chancroid, gonorrhea and acute pelvic inflammatory disease (PID):
Chancroid (Haemophilus ducreyi infection): 250 mg IM as a single dose.
Gonoccocal infections, uncomplicated: 125 mg IM once plus Doxycycline.
Conjunctivitis: 1 g IM single dose.
Disseminated: 1 g IM or IV every 24 hours.
Meningitis/Endocarditis: 1 to 2 g IV every 12 hours for 10 to 14 days (meningitis) or for at least 4 weeks (endocarditis).
Children: (<45 kg): with bacteremia or arthritis, use 50 mg/kg (maximum, 1 g) IM or IV as a single dose for 7 days. For meningitis, increase duration to 10 to 14 days and maximum dose to 2 g. Infants: 25 to 50 mg/kg/day IV or IM as a single daily dose, not to exceed 125 mg. For disseminated infection, continue for 7 days, with a duration of 7 to 14 days for documented meningitis. Acute PID (ambulatory): 250 mg IM plus Doxycycline.

Store in a dry place at temperature not exceeding 25oC. Protect from light and moisture.