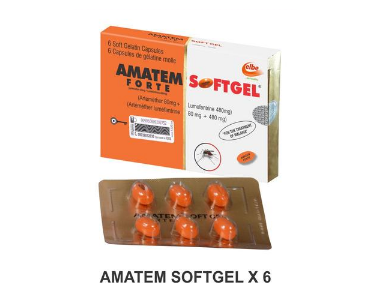 Artemether and Lumefantrine combination is a fixed dose Artemisinin-based Combination Therapy (ACT) combining Artemether, an artemisinin derivative, and Lumefantrine, a synthetic antimalarial drug.
Artemether is a sesquiterpene lactone derived from artemisinin. Artemisinin is a compound derived from the sweet wormwood plant and has been used for centuries in traditional Chinese medicine to treat fever. Lumefantrine is a synthetic aryl-amino alcohol antimalarial (Quinine, Mefloquine and Halofantrine are members of the same group).
Pharmacodynamics:
Both Artemether and Lumefantrine act as blood schizontocides. The site of antiparasitic action of both components of the combination is the food vacuole of the malaria parasite, where they are thought to interfere with the conversion of haem, a toxic intermediate produced during haemoglobin breakdown, to the non-toxic haemozoin, malaria pigment. Parasites in the infected erythrocytes ingest and degrade haemoglobin and concentrate the iron in a food vacuole in the form of toxic heam. Normally, the heam is then made harmless by conversion into haemozoin.
Artemether is concentrated in the food vacuole. It then split its endoperoxide bridge as it interacts with haem, blocking conversion to haemozoin, destroying existing haemozoin and releasing haem and a cluster of free radicals into the parasite. Both Artemether and Lumefantrine have a secondary action involving inhibition of nucleic acid and protein synthesis within the malarial parasite. Artemether and Lumefantrine combination is active against the blood stages of P.vivax, but is not active against hypnozoites. Therefore, an 8-aminoquinoline derivative such as Primaquine should be given sequentially after the combination in case of mixed infections of P. falciparum and P. vivax to achieve hypnozoites eradication.
The combination is also associated with rapid gametocyte clearance.
Rationale for the combination of Artemether and Lumefantrine: Artemether and its derivatives are at present, the only effective drug against resistant malaria. However, their use alone may result in development of resistance to these life saving drugs. According to the new WHO malaria treatment guidelines, uncomplicated falciparum malaria must be treated with Artemisinin Combination Therapy (ACT) and not by artemisinin alone or any other monotherapy.
Artemether when used correctly in combination with other anti-malarial drugs is not only effective in curing malaria, but also the parasite is highly unlikely to become drug resistant.
Pharmacokinetics:
Artemether is absorbed faily rapidly with peak plasma concentrations reached about 12 hours after dosing. Absorption of Lumefantrine, a highly lipophilic compound, starts after a lag period of up to 2 hours, with peak plasma concentration about 6-8 hours after dosing. Food enhances the absorption of both Artemether and Lumefantrine. The relative bioavailability of Artemether was increased more than two fold and that of Lumefantrine sixteen fold compared with fasted conditions when Artemether and Lumefantrine tablets were taken after a high fat meal. Likewise, in patients with malaria, food increase the absorption of Lumefantrine, although to a lesser extent (approximately two fold), most probably due to the lower fat content of the food eaten by acutely ill patients. Acutely ill patients are reluctant to eat and tend to avoid high fat foods. In order to improve bioavailability, patients should be encouraged to take the drug with a normal diet as soon as food can be tolerated.
Artemether and Lumefantrine are both highly bound to human serum proteins in vitro (95.4% and 99.7%, respectively). The artemisinin metabolite dihydroartemisinin is also bound to human serum proteins (47% - 76%).
Artemether is rapidly and extensively metabolized by human liver microsomes (mostly through the enzyme CYP3A4/5) in vitro and in vivo, with a substantial first pass metabolism. The main active metabolite is dihydroartemisinin.
Lumefantrine is also metabolized predominantly by the enzyme CYP3A4 in human liver microsomes. At therapeutic plasma concentrations, Lumefantrine significantly inhibits the enzyme CYP2D6 in vitro.
Artemether and dihydroartemisinin are rapidly cleared from plasma with an elimination half-life of approximately 2-3 hours. Conversely, Lumefantrine is eliminated very slowly with a terminal half-life of 2-3 days in healthy volunteers and 4-6 days in patients with falciparum malaria.
No urinary excretion data are available for humans. In animal studies, unchanged Artemether has not been detected in both faeces and urine due to its rapid and high first-pass metabolism, but several metabolites (unidentified) have been detected in both faeces and urine. Lumefantrine is eliminated via the bile in rats and dogs with excretion primarily in the faeces.

Artemether and Lumefantrine tablets are indicated for the treatment of P. falciparum malaria cases resistant to both Chloroquine and Sulphadoxine-Pyrimethamine combination.
The combination is recommended for first line treatment of malaria.

Artemether and Lumefantrine tablets are contraindicated in those with hypersensitivity to the active substances or any of the excipients. In case of severe malaria, in the first trimester of pregnancy. Patients with a family history of congenital prolongation of the GTc interval or sudden death, or with any other clinical condition known to prolong the QTc interval such as patients with a history of symptomatic cardiac arrhythmias, patients with clinically relevant bradycardia or with severe cardiac disease, family history of sudden death, disturbances of electrolyte balance, e.g hypokalaemia or hypomagnesaemia.
Concomitant use of drugs that are known to be metabolized by cytochrome enzymes CYP2D6 (e.g Flecainide, Metoprolol, Imipramine, Amitriptyline, Clomipramine).
Patients taking drugs that are known to prolong the QTc intervals such as antiarrhythmics of classes IA and III, Neuroleptics, antidepressant agents, certain antibiotics including some agents of the following classes: macrolides, fluoroquinoloes, imidazole, and triazole antifungal agents, certain non-sedating antihistaminics (Terfenadine, Astemizole), Cisapride. Artemether and Lumefantrine tablets are not indicated for prophylaxis, or for treating severe malaria, including cerebral malaria, or malaria with pulmonary oedema or renal failure. It is also not indicated for and has not been evaluated in the treatment of malaria due to P. vivax, P. malariae or P. ovale.

Use with caution in patients with severe hepatic or renal insufficiency and patients refusing food intake. Patients who remain averse to food during treatment should be closely monitored as the risk of recrudescence may be greater.
Effects on ability to drive and use machinery: Driving and use of machinery is not recommended due to risk of dizziness and fatigue/asthenia.
Usage in pregnancy and lactation: Artemetther and Lumefantrine tablets are contraindicated during the first trimester of pregnancy. During the second and third trimesters, treatment should nonly be considered if the expected benefit to the mother outweighs the risk to the foetus. As the drug is contraindicated during the first trimester of pregnancy. Women of child-bearing potential should not conceive while on Artemether and Lumefantrine. This includes women prescribed the combination for standby emergency treatment of malaria during their travel, in case they may require treatment of malaria.
Women of child-bearing potential should be advised to practice contraception during travel with standby emergency treatment, while on Artemether and Lumefantrine and until the start of next menstruation after the treatment.
Breastfeeding women should not use Artemether and Lumefantrine tablets due to the long elimination half-life of Lumefantrine (4 to 6 days). It is recommended that breastfeeding should not resume before day 28 after discontinuation of Artemether and Lumefantrine combination unless potential benefits to mother and child outweigh the risk of the combination treatment.

Artemether and Lumefantrine tablets should be taken with high fat food or drinks such as milk. Note that patients with acute malaria are frequently averse to food. Patients should be encouraged to resume normal eating as soon as food can be tolerated since this improves absorption of Artemether and Lumefantrine. In the event of vomiting within 1 hour of administration a repeat dose should be taken.
For adults and children weighing 35 kg and above, a standard three days treatment schedule with a total of 6 doses is recommended as follows: four tablet as a single dose at the time of initial diagnosis; again four tablets after eight hours and then four tablets twice daily (morning and evening) on each of the following two days (total comprises 24 tablets).
For infant and children weighing 5 to less than 35 kg, a six-dose regimen is recommended with 1 to 3 tablets per dose, depending on bodyweight. With very small children, the tablet should be crushed before giving.
Special population:
Dosage in elderly patients: Although no studies have been carried out in the elderly, no special precautions or dosage adjustments are considered necessary in such patients.
Dosage in patients with renal or hepatic impairment: No specific studies have been carried out in these groups of patients and no specific dose adjustment recommendations can be made for these patients. Most patients with acute malaria present with some degree of related hepatic impairment. The adverse event profile did not differ in patients with and those without hepatic impairment.
Moreover, baseline abnormalities in liver function tests improved in nearly all patients after treatment with Artemether and Lumefantrine combination.
New and recrudescent infections in adult, children and infants: Data for a limited number of patients show that new and recrudescent infections can be treated with a second course of Artemether and Lumefantrine combination.
Overdosage:
In cases of suspected overdosage, symptomatic and supportive therapy should be given as appropriate. ECG and blood potassium levels should be monitored.

Keep in a cool, dry, and dark place.